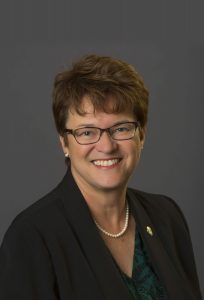 “The five years I have spent as president of these two institutions has been one of the most fulfilling times of my professional career,” Hensrud said. “In collaboration with a truly excellent faculty and staff at both institutions, we have achieved many remarkable things together. I look forward to all we will accomplish in my final year.”

Dr. Devinder Malhotra, chancellor of the Minnesota State system of colleges and universities, applauded Hensrud’s leadership and outlined the process for seeking her successor.

“I will begin the search to identify the next president of Bemidji State University and Northwest Technical College this fall to continue on the deep history and tradition of delivering higher education in the greater Bemidji community.”

Hensrud said she leaves BSU and NTC knowing they are positioned for success in the future.

“I think the past five years have shown that Bemidji State University in Northwest Technical College are extremely strong institutions,” she said. “My time as president has been a wonderful experience as I have had the opportunity to move the institutions forward within this community.”

Hensrud’s tenure as president of both institutions has been defined by extensive strategic planning processes, broad-ranging successes in forging new partnerships in the community and throughout the northern Minnesota region, and a diligent emphasis on social justice.

Her efforts to improve the connections between both institutions and the region’s Indigenous nations have been particularly noteworthy. Hensrud has formed American Indian Advisory Councils for both BSU and NTC; signed dual-enrollment agreements with all four Minnesota tribal colleges, creating a model replicated by other Minnesota State universities; and led a process to craft an acknowledgement of BSU’s campus location on ancestral homelands of the Ojibwe and Dakota people.

In 2020, BSU had the largest number of enrolled American Indian students (350) and graduates (65) in its history.

“The work that we’ve done within the American Indian communities and in the tribal relationships is really an area of pride for me,” she said. “There’s always more work to do if we are to become a destination institution for American Indian students, and to see us make progress towards that has been special.”

Under Hensrud’s guidance, both BSU and NTC have seen increases in the diversity of their student bodies. A Center for Diversity, Equity & Inclusion provides services and programming for students at both campuses, and in 2021 Hensrud hired a Campus Diversity Officer to guide the strategic priorities of both campuses related to diversity, equity and inclusion.

At NTC, a partnership between the Northwest Minnesota Foundation and NTC Foundation have led to significantly increased scholarship support for NTC students. The college also has greatly expanded its partnerships with area high schools, which includes teaching nursing and plumbing courses on high school campuses.

NTC also opened its Student Success Center, which has dramatically increased tutoring services and other support for its students. Use of new software has also expanded NTC’s ability to identify students who may be in need of increased academic support, allowing staff to quickly connect students with the resources they need.

Both campuses have also seen extensive renovations under Hensrud’s leadership. At Bemidji State, a decade-long dream to replace Hagg-Sauer Hall was finally realized in 2020. A new building, which has won numerous awards for government construction projects, was dedicated as part of an extensive campus renovation project which re-imagined space in four other academic buildings. At NTC, a brand-new commercial refrigeration lab highlighted significant renovations to labs for the college’s automotive, electrical construction and nursing programs.

Hensrud renewed BSU’s commitment to environmental sustainability by joining the Campus Climate Commitment, which focuses on climate and resiliency.

Most importantly, however, Hensrud guided both BSU and NTC safely through the first 18 months of the COVID-19 pandemic. Both campuses have shared in the wide-ranging disruptions caused by the pandemic and various mitigation strategies. However, due in part to their shared pandemic response, neither BSU nor NTC have had a confirmed case of COVID-19 as a result of on-campus spread, and no employees or students have been lost to the virus.

Hensrud was announced as the president of Bemidji State University and Northwest Technical College on April 20, 2016, assuming the role on July 1 of that year. She succeeded Dr. Richard A. Hanson, who had served as president of both institutions since July 2010.

Malhotra has announced a September 16 visit to both the BSU and NTC campuses, where he will meet with faculty, staff and students. A current president at one of the system’s colleges or universities will be named to chair a search advisory committee. The system intends to name a new president during the spring semester, with a start date of July 1, 2022.