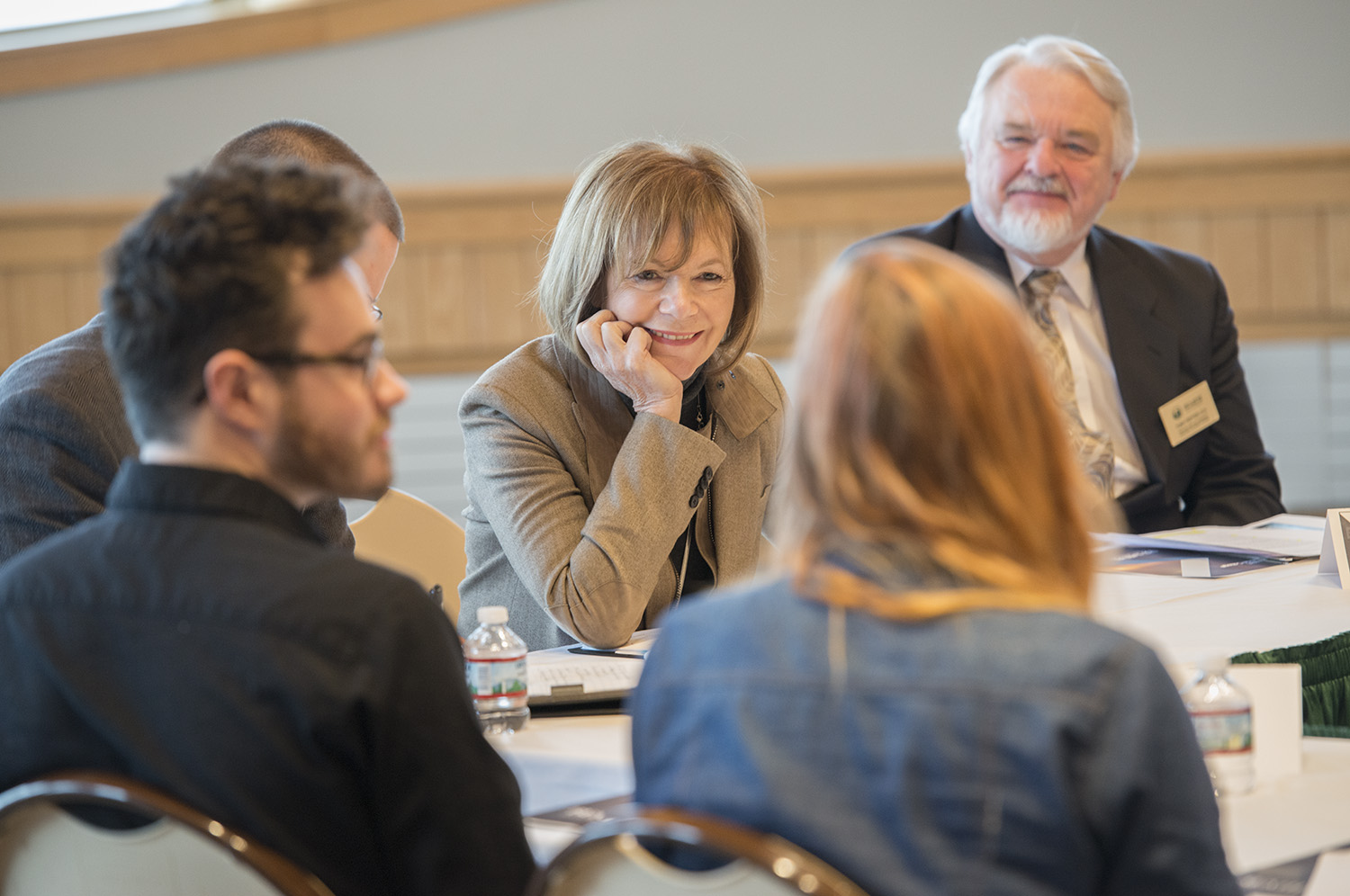 U.S. Senator Tina Smith (D-MN) listened to Bemidji State University and Northwest Technical College students, faculty and administrators as they shared stories about their own experiences with the cost of higher education during a Feb. 22 roundtable conversation at BSU’s American Indian Resource Center.

Smith, a member of the Senate Education Committee, said her goal at the roundtable, one of several stops on a tour of Northern Minnesota, was to learn more about the challenges students face when paying for their educations.

“People are not aware of the incredible grit and hard work it takes to get a higher education degree,” she said.

She said the conversation was part of her ongoing effort to “follow up good words with action” and focus her educational policy priorities on four areas:

Students from both campuses spoke to the financial challenges that go hand-in-hand with the pursuit of a college education, and the obstacles they each have overcome to remain in school. Many of the stories involved the federal Pell Grant program, which are typically awarded to undergraduate students who display exceptional financial need.

Jonathan McNicoles, a senior criminal justice and psychology major from Maple Grove, Minn., put $4,000 on a personal credit card to cover gaps between his college expenses and what financial aid would cover.

“I had to make a very bad decision early in my life to be able to stay in school,” he said.

Northwest Technical College nursing student Romi Stone juggled numerous county support programs as a single parent while also navigating a complex financial aid system in order to pull together enough funds to pursue her education. She was simultaneously pursuing a bachelor’s degree at BSU and her nursing diploma at NTC, and realized that completing the bachelor’s degree was going to work against her from a financial aid standpoint.

“It wasn’t in my best interest to finish my bachelor’s degree, because it would have made me Pell-ineligible,” she said.

BSU wildlife biology major Mattie Osborn, a senior from Bemidji, said restrictions preventing Pell Grants from being used on short-term courses lead students to compensate by overloading traditional-semester schedules. Osborn took advantage of BSU’s banded-tuition opportunities and added a course she would have preferred to take during the summer to an already-full fall semester.

“Having extra Pell in the summer would have been huge,” she said. “But instead, I made the choice to add an extra class to my fall semester. Because of finances, I was taking more credits than I should have in order to be successful.”

Sen. Smith spoke several times about the value of micro-grant programs that allow schools to address immediate, often small, financial needs that can help derail a student’s path toward graduation. Dr. Tony Peffer, vice president for academic & student affairs, shared how a similar program is having a positive impact on Bemidji State’s efforts to help keep its students in school.

“Our retention numbers this year increased by 3.5 percent over last year, and a major factor in that were these small grants,” he said.

Sen. Smith said she appreciated the opportunity to hear directly from students about their experiences.

“It was great to be able to hear these great stories,” she said. “It speaks to the impact it will have on students’ lives if we don’t fix this problem.”

She said she was hopeful that the Senate Education Committee could develop proposals to modernize federal financial aid and benefit future college students.

“The committee has a history of doing good, bipartisan work,” she said.

Bemidji State University, located amid the lakes and forests of northern Minnesota, occupies a wooded campus along the shore of Lake Bemidji. Enrolling more than 5,100 students, Bemidji State offers more than 80 undergraduate majors and eight graduate degrees encompassing arts, sciences and select professional programs. BSU is a member of the Minnesota State system of colleges and universities and has a faculty and staff of more than 550. The university’s Shared Fundamental Values include environmental stewardship, civic engagement and international and multicultural understanding. For more, visit bemidjistate.edu or find us at BemidjiState on most of your favorite social media networks.